In 1990, son, Ray was out of high school so Burch and Linda sold the Alta Club to Wayne Kurtz and  moved to Reno, Nevada.  They bought the Cork Room Lounge on South Virginia and Burch went to work at the Cal Neva, a casino owned by an old gambling pioneer from Great Falls, MT.  He dealt for a while, then moved into management there. He, son Ray, and Linda

joined The Sierra Highlanders,  a very good pipe band, and was elected by the band to the position of Pipe Major (band leader again).  The pipe band competed successfully in the western US and did two trips to Scotland where they competed in the World Pipe Band Championships in Glasgow.  Burch and Linda enjoy the the sunshine in Nevada and have made many great new friends.  Burch has a recording studio at home and still writes and records covers of his old favorites.  He has turned the job of pipe band leader over to son Ray, but he and Linda still play in the pipe band.

Burch stays busy playing and enjoying all of his instruments and playing with his old Walkers bandmates.  Burch is currently building historical video scrapbooks of Burch Ray and the Walkers, incorporating cuts of their records and old photos and footage.  These will be posted on Youtube.

On April 13, 2013, “Burch Ray and the Walkers” were inducted into the South Dakota Rock ‘n’ Roll Hall of Fame in Sioux Falls, South Dakota.  It was a great honor and due to the early years of playing rock and roll in the Midwest.  The band played a thirty minute set.  Members were:  Burch, Joe Konkright, Gary Askin Dennis Steiner, Bill Hainer, Ray Palmer, Linda Palmer and Dennis Mellville.

In 1973, Burch and Linda, along with son, Ray moved back to their home town, Miles City, MT.  They were getting tired of wearing out cars and living out of suit cases.  Burch, Linda and band members, Wayne Kurtz and Jack Allison bought the Alta Club. Dennis Mellville, Burch’s nephew and Randy Savage were also in The Walkers at this time.  The Alta Club was a good sized night club on the edge of town and the band could play there and not have to travel.  Montana had voted in gambling , so pretty soon they had a good poker game.  Wayne and Burch ran the gambling and Dennis, Jack and Randy played a trio.  As time  went on, they were so busy running the very popular club, that they started hiring other bands to come in.  The Walkers, at this time kind of faded away.  From time to time some good musicians would come along and Burch would put together a house band and they were always called The Walkers.  In the 80’s  Burch, Linda, Ray and The Walkers did some 50-60’s shows and played all the old rock music from the early days.   These shows were great and recordings were made of them.  The music came out quite well for  live shows.  In 1979 Burch cut a country album in Nashville.  He wrote a lot of the songs himself and some of the more popular ones were ‘MONTANA GAMBLER’ , ‘LOVE HER OFF MY MIND,’ AND ‘FIDJUN.’  During this time, Burch had become a pretty good fiddle player and also played some 5-string banjo.  He then got interested in the bagpipes and he and his son, Ray, started the Miles City Caledonian Pipe Band.  Four summer piping schools were attended in Denver to achieve some expertise.

Burch Ray and the Walkers Biography

Burch Ray Palmer attended high school at Custer County High School in Miles City, MT.  After graduation he started The Walkers rock ‘n’ roll band.  He was very much impressed by people like Chan Romero from Billings, MT and Eddie Cochran who came to town during his senior year.  Burch’s parents, Ray and Crystal, bought him a Gretsch guitar at that time, and he drove cattle truck with his father to earn enough to buy a Fender Concert Amp.  Burch decided to go by his  first and middle names on stage so the band became “Burch Ray and the Walkers.” The Walkers name came from a Duane Eddy record, “The Walker.”  The name also came from always being broke down in Joe Konkright’s ‘56 Chevy and having to ‘walk.’  It was kind of an opposite of “Roadrunners,” another popular band name at that time.  There were many good musicians and entertainers who played in The Walkers over the years, but the originals were Joe Konkright, drums, Eddie Harris, bass and Gary Askin, rhythm guitar.  Walkers who joined the band in ‘62 were Gary Mundon, bass; Doug Boyle, drums; and Dennis Steiner; guitar.  After the army in ‘64, another school and army buddy Wayne Kurtz, joined the band as drummer.  Wayne, Gary Mundon and Burch played many shows together.  The band played many ballrooms, dance halls, roller rinks, armories, pavilions, gymnasiums, etc., during the rock’n’roll years 1961-1967.  They were popular in the Dakotas, Montana, Wyoming, Minnesota, Iowa and Nebraska.  Highlights during that time were backing Chubby Checker, Dickey Lee, Buddy Knox, a tour with The Angels and some shows with The Everly Brothers and The Beach Boys.  The band’s first record ‘WAITIN’ ALONE  b/w TIME TRAP’  was recorded at

SOMA Records in Minneapolis in 1962.  The next record ‘LOVE QUESTIONS b/w

LOVE WAS MADE FOR TWO’  was recorded by Ray Ruff in Amarillo, TX in 1965.  The last record cut by  Burch during that period was ‘WELL...ALL RIGHT b/w PLAYGROUND.’  This session was done in Hollywood and was co-produced by Sonny Curtis, Jerry Allison and Buddy Knox.  Some of The Crickets and Glen Campbell played on this session.

Burch was a member of the Montana National Guard so, in 1967 took some time off from music to attend officer’s school in Fort Benning, GA.  He was commissioned a 2LT in an

armored cav unit in Montana.  In the fall of ‘67, Burch, Wayne and Gary Mundon, along

with guitar player/singer, Bill Brown, formed a Walkers band that could play a mixture of rock and country on a major night club circuit.  Sam Gibbs heard the band play in Billings, MT and liked the band.  This would be the start of a six year tour of night clubs and military bases throughout the U.S.  Some of the highlights of this era were playing The Golden Nugget in Las Vegas,  Frontier days in Cheyenne, The Caravan East in Albuquerque and the 17 Bar in Billings, MT.  In 1970, the band did an Asian tour.  The Walkers on this tour were Bud Blaylock, Kostas, Joe Brumley, Linda and Burch.  Linda, Burch’s wife did a great job singing, dancing and playing tambourine.  The troops loved the variety and talent in the band, especially Linda.  Kostas, went on to be a top song writer in Nashville.  Burch and The Walkers did a lot of recording in the 70’s in Las Vegas with Bill Porter at United Recording.  Bill was a good engineer and did Elvis Presley’s sound mixing when he was in town.  They did an album there and released several singles from it.  The most popular of these cuts was ‘BANKS OF THE YELLOWSTONE’, written by Burch and ‘SUMMERTIME BLUES. 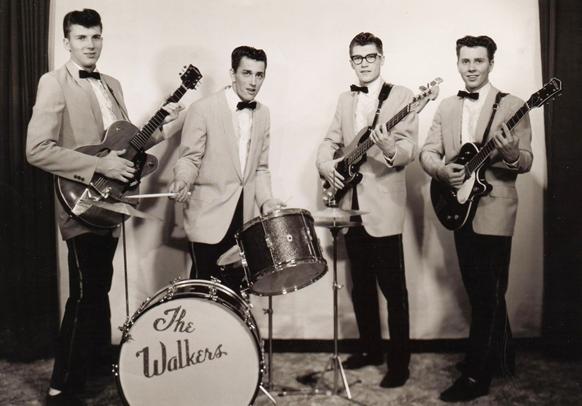 Songs from the heart